Anyway, I’m no fan on Whitney Houston. Moreover, the only thing I know is her feature movie, The Bodyguard and the title song, I Will Always Love You
The movie has a brilliant scene with Kevin Costner, playing the bodyguard, named Frank Farmer. 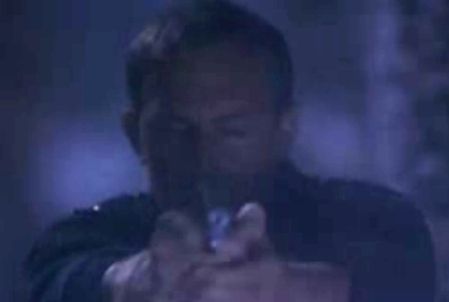 When he needs to shoot a guy in the fog, he sits down, holds out his pistol and…closes his eyes. He is using ears to aim his gun.
That may look strange at first glance: who in right mind aims a gun without looking through the sights? Those things are called sights for a reason!
However, in low visibility condition, the information from the eyes is only a distortion, so Frank closes them to stop the information flow. His body substitutes one sense – eyesight – with hearing.And that sensory substitution is the very essence in handicapped world. Blind people use fingers to read books.Upper limbs amputees use toes to type on computers. Death people easily notice slight differences between hand gestures, while for healthy people all the sign language is one big gay finger snap.
I know a guy who had a severe injury on his right (dominant) hand. His bones were fit with metal rods and he had his arm totally immobilized for several months. However, he was amazed how quickly his body reconfigured itself to make the healthy left hand dominant.
In fact, people with some of the senses disabled, have the remaining ones even superior to those of healthy people. Of course, the sensory organs are the same. It’s our brain that does the trick. With some of the information channels cut, the brain adopts and extracts more data from the rest.
Did that information help the bodyguard shoot bad guy? Well, go see for yourself.